A Little Bit of Everything For Dummies - Now Free for Kindle! 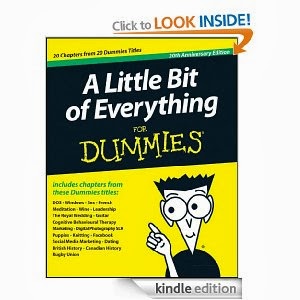 If you're a fan of the "For Dummies" series of books, or would just like to know a bit about a whole lot of things, here's a great free Kindle book for you.

A Little Bit of Everything for Dummies celebrates 20 years of the For Dummies series with 20 chapters covering a vast rage of subjects from DOS through to Canadian History, guitar and even puppies! Best of all, it's currently free to download for Kindle!

Here's an outline of the different sections from the product description:

I've not had time to read through it yet, but hope many of you will find it a worthwhile (if not interesting) read.

Be sure to let me know what you think in the comments section below.

October 30, 2013
Archive.org provides all 51 volumes of The Harvard Classics anthology in many formats for free download on their servers. Unfortunately, the current page listing all of these volumes is a little disorganised, so to help you easily locate and download the files you need, I have collected all of the links on a single page . You will find volumes organised numerically with a short description of the text and download links for the PDF, MOBI, ePub and plain text files.
3 comments
Read more

January 15, 2021
Edward Fitzgerald Edward Fitzgerald (1809–1883), "Rubaiyat of Omar Khayyam"  Omar Khayyam laughed and enjoyed the good things of life. His "Rubaiyat," the most popular philosophic poem, is the best of all books to dip into for an alluring thought. I WAKE!  For the Sun behind yon Eastern height Has chased the Session of the Stars from Night;     And to the field of Heav’n ascending, strikes The Sulta´n’s Turret with a Shaft of Light. II Before the phantom of False morning died, Methought a Voice within the Tavern cried,     “When all the Temple is prepared within, Why lags the drowsy Worshipper outside?” III And, as the Cock crew, those who stood before The Tavern shouted—“Open then the Door!     You know how little while we have to stay, And, once departed, may return no more.”
Post a Comment
Read more

How Conscience Makes Cowards of Us All

March 25, 2020
Edwin Booth as Hamlet William Shakespeare (1564–1616). The Tragedy of Hamlet Prince of Denmark. Vol. 46, pp. 144-158 of The Harvard Classics Hamlet pondered over which course contained the least unhappiness - whether to suffer here and not incur new dangers, or whether to end it all and chance the unknown terrors of the next world. See how Hamlet reasoned. (Shakespeare makes his will, March 25, 1616.) Act III Scene I [...] Enter  H AMLET    Ham.   To be, or not to be: that is the question. Whether ’tis nobler in the mind to suffer The slings and arrows of outrageous fortune, Or to take arms against a sea of troubles, And by opposing end them. To die; to sleep; No more; and by a sleep to say we end The heart-ache and the thousand natural shocks That flesh is heir to. ’Tis a consummation Devoutly to be wish’d. To die; to sleep;— To sleep? Perchance to dream! Ay, there ’s the rub; 1 For in that sleep of death what dreams may come, W
Post a Comment
Read more